Looking through my archives of pictures over the years whilst compiling images for the gallery section of this website I have found some pieces which were seminal in the development of ideas and direction. Here are three.

A painted and screenprinted silk satin evening dress incorporates an image of the bronze charioteer from Delphi in Greece . It  is one of the best-known bronze statues to survive from Ancient Greece. The life-size statue of a chariot-driver was found in 1896 at the Sanctuary of Apollo at Delphi and is now in the Delphi Museum. It was commissioned by the tyrant Polyzalos of Gela, Sicily, to commemorate the victory of a chariot team in the Pythian Games, held at the sanctuary at Delphi every four years in honour of Apollo, god of prophecy.

In a lot of my early clothing I was interested in the way archetypical images  – Greek , Egyptian , Etruscan  – communicate a sense of the universality of the human condition through what we now regard as classical representation.

In this image we also see  a specific character , quite introvert and very focussed – serene too. 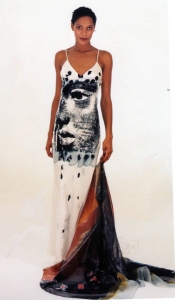 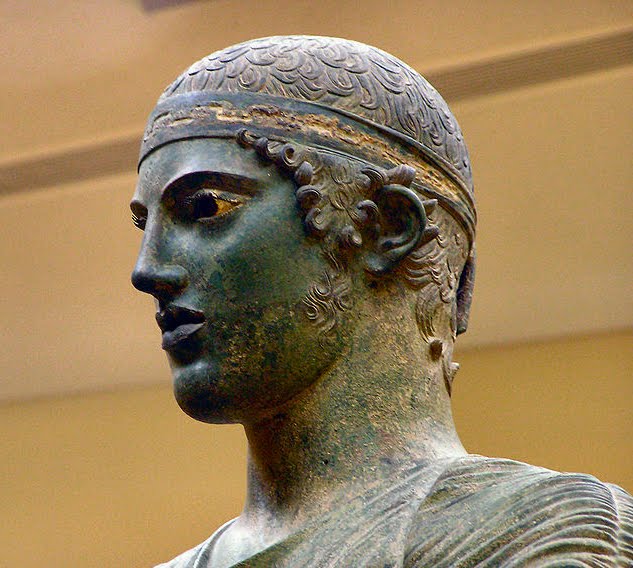 Below is a devore, or ‘cut velvet’,  dress from 1995 , exhibited in  a solo exhibition at Chapel Row Gallery in Bath. I used images of the brickwork in walls at to create texture in the cloth in the shape of the bricks – some were solid velvet , some were trasparent gauze. I was thinking about the way in which we use clothes as protection – as these immense walls protect a space – our clothes protect and reveal our personalities. 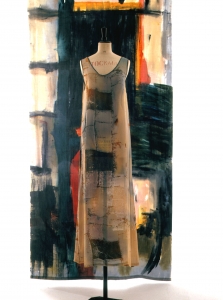 Devore techniques are fascinating – and involve removing the surface of a fabric with two different yarn types – its use on velvet was extensive in the late 1990’s to the point of exhaustion – but it stood me in good stead at Harvey Nichols , Liberty, Barneys and Bergdorf Goodman.

Thirdly – a painted, quilted silk coat and fragile organza dress – in which the imagery has become much more abstract and refers to the core of the wearer – the spine becomes a dark image through the centre back and front. These pieces were made for an installation of paintings on translucent gauze which moved gently when visitors entered the room – here at the wonderful Midland Grand St Pancras Hotel when it was derelect and used for such things……. 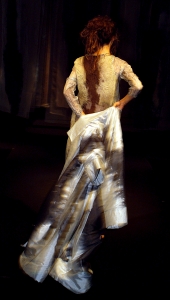 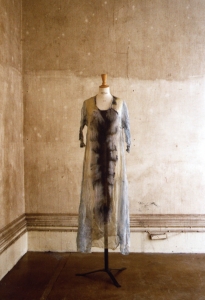 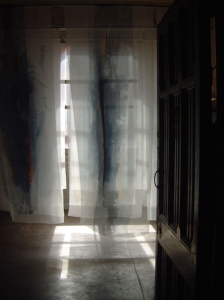